Yvonne Stories is a title given to unlikely encounters that have been happening to me my entire life, by many friends I have shared them with throughout the years. In fact, after having sent the following story for my first blog with this title to a few friends one friend, who has known me for well over 30 years, wrote back and commented not only had such encounters often happened to me but that often life somehow manages to arrange unbidden meetings with famous people or people I admire. Thus, Yvonne Stories as a blog came into being. I will share new stories as they happen but I will also share stories from my past.

During the Licht Mauerfall or Wall Of Light 25 Years Later celebrations, November 7-9, 2014, a reporter named Frederik Pleitgen  gave a fascinating interview from the East Side Gallery here in Berlin (the East Side Gallery is an entire, intact section of the Berlin wall upon which artists have made a mural). Mr. Pleitgen spoke about how things have changed AND at the same time have stayed the same adding some of the many shades of gray in between since the wall first fell 25 years ago.

Mr. Pleitgen spoke about having grown up in Washington D.C. although both his parents are German and that he’d lived in Cologne as well.. His observations, I felt were right on from my perspective as an American living in Berlin while, at the same time, he was able to look at this issue from both the east and west perspectives of the residents of this city in what seemed like a fair and balanced way.  Pleitgen’s voice was rich and resonant, his style struck a nice balance between the personal and the objective. From all this, I got the sense that this journalist was a regular, approachable guy and was someone I would like to get to know. That impression inspired me to google him, which led me to interesting discoveries one of which is that his father, Fritz Pleitgen, is a prominent German journalist himself.

December 7, 2014 I was invited to a much anticipated, nearly annual Advent party here in Berlin.  Just after I arrived, I greeted the hostess, who was talking to a couple both of whom were very friendly, open and striking. The hostess and I speaking English with each other hastened to share with the couple she introduced me to that I spoke German even while adding, for my benefit, that they also spoke perfect English.  The husband’s rich, baritone voice struck a bell in my mind’s ear.  I took a second look at him and without filtering my thoughts, in a manner typical to me, I blurted out:

“You look really familiar to me, I think I know you!”
Space
The husband showed no sign of recognizing me although he and his wife exchanged smiles and seemingly knowing looks. His wife commented that my observation could be right. I was intrigued.
Space
As soon as the hostess and I had a chance to be alone, I asked her for the name of this guest. I did not catch it at first so she repeated it and then added that he was a colleague of her husband’s (a CNN executive). She also shared with me that she was meeting this guest and his wife for the first time that evening. That sent my brain into over drive searching for how I knew him when the penny suddenly dropped.  I realized that this guest is the journalist from the East Side Gallery report about which I spoke above.
Space
Beside myself with excitement and a bit of disbelief, I gingerly approached Mr. Pleitgen and explained what had made me feel that I knew him. Without missing a beat and completely unfazed, he took out his cell phone and began showing me pictures about the car from one of his reports during the week-end of the wall celebrations (see first link from East Side Gallery report below).  From there, he and his wife, other guests and I spent the rest of the evening chatting, sharing stories and socializing as if we had known each other for ages.  At the end of the evening, the Pleitgens even offered to give me a lift.
Space
How could I ever have guessed in November, while sitting at my computer watching a fascinating report On-line, that one month later I would meet and spend an evening chatting with the very same reporter, who had so captivated me in Cyberspace? 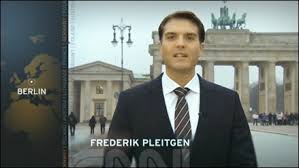