An American in Berlin: November 9, 2014 – A Second Mauerfall – 25 Years Later : An eyewitness account

All day long November 9th, I kept changing my mind about going or not to this evening’s closing event after three days of remembrances. Friends had planned to celebrate at the Brandenburg Gate but there was no question that I would join them as I am not a fan of crowds.  At some point closer to the appointed time, an American friend and colleague of mine living in Southern Germany sent me an email asking if I would attend the “Mauerfall” or light show simulating the fall of the Berlin Wall 25 Years Later. She waxed lyrical about how great it must be to be living in Berlin and especially at this precise moment in time. My conscious was pricked, although not sufficiently until, as the clock was ticking,  I began thinking about the fact that my very first visit to Berlin had been 6 months before Fall of the Wall in May of 1989. On that visit, after much discussion, our prognosis was that the wall would stand for at least another 20 to 30 years.

The intersection of Bernauer and Brunnenstrasse (streets) is a meeting of east and west steeped in history before, during and after the wall. Most recently, Bernauerstrasse houses the indoor/outdoor Wall Museum leading up to and will eventually continue pass Brunnenstrasse further into the east. Considering that this intersection is a mere three blocks from my house, it slowly dawned on me what a sacrilege it would be to be present in Berlin, living so close by and not be part of this historic moment. Quickly, I gathered my nerve and headed out to join masses of other people streaming out to our collective date with destiny.  This is my account:

Because I thought ‘why take my smart phone since it is dark outside?’, I left my mobile phone with camera at home. Once I arrived, I came face to face with a sea of people holding up cell phones and real cameras taking pictures and mini films recording the moment. Screens from these gadgets were flickering light into the dark night like stars in the sky, which could be seen all up and down the street. Anticipation and excitement permeated every thing and grew by the second.  A friendly, easy feeling filled the air settling over the crowd like a warm blanket. One guy had brought his tripod and was moving around scouting out the best positions. When I asked him if he was from a magazine or newspaper, he replied that he was capturing the moment for his family and friends who could not be there.

Moments later, an East Indian looking guy asked me to take his picture nearly dropping his camera but trusting me to record this moment for him. Suddenly, without warning or organized or enforced instruction,  this normally busy intersection slowly came to a stand still. I’d arrived at about 6:50PM.  The crowd had begun gathering first at the side walks and then very slowly, we crept toward  the middle of the street eventually halting traffic in its tracks.  Considering my dislike for crowds, I had a stroke of good fortune in that a car, stranded by the crowds just beyond the middle of the intersection, became the perfect shield between the crowd and me from the north side of Bernauerstrasse with Brunnenstrasse to my left. The other side of the street in front of me to the south, which houses part of the Open-Air Wall Museum, had whole areas of open spaces and so the crowd  on that side, although vast, was not crammed in by the buildings like on the side from which I had approached.

A woman, named Elke, advised the driver of the stranded car nearest to where we stood to turn off her car and join the party in the street informing her that all the cars a head of her were blocked and could not move. The car’s occupants were three older, former East Berlin ladies.  They were a bit shy but once they felt safe joining us they indeed got out the car for better views and conversation.

Someone, whose apartment was high up with views facing south, east and west at the south west corner of the intersection was pumping Beethoven’s 9th Symphony  into the night air.

Just before our section of the wall was scheduled to release its portion of the wall, fire works went off lighting up the night sky. Apparently, balloons were released  about 10 at a time starting at the Brandenburg Gate so that instead of the balloons simultaneously being released at 7PM as many thought, our section was not scheduled to be on until  about 7:45.  There were 8,000 illuminated balloons along where the wall once stood and in some places still stands. I read that there was a person for every balloon and that every balloon had a story attached to it.  One unfortunate aspect was that once the balloons were released from their stands, they were  no longer illuminated. Although the dramatic effect of light meant that the wall went dark,  I felt that the balloons resembled  ghosts-like spirits with tails flickering as if finally set free.

The crowd cheered, clapped and roared as we  watched the balloons rise heavenward, one after  the other, up the street then over to the east. I should mention that this neighborhood sits in an S curve verses a straight line so that from my vantage point the balloons lifted off from the west in the direction of the east. From my apartment, the east was located a few blocks south, east as well as to the north. This long anticipated moment when the strikingly lit wall was raised a second time was somewhat anti climatic as well as it was an overwhelming. The feeling is not easily translated into words. The best I can do is to say that it was sobering, very peaceful but also joyful and moving.

After three days of excitement and events, without instructions and quite spontaneously yet at the same time, as if on clue, people began bidding each other farewell and quietly dispersing.

Elke, the very friendly woman I spoke about already, who had encouraged the people in the car  to come out and join us, was there with her husband Heiner. They, the people from the stranded car and I were talking and had formed a lovely group.  In  fact, they gave me the feeling that they were happy that I, an American, was in their midst to celebrate with them.  Heiner  began reminiscing and  sharing that, as a boy and young man, he had lived right off of Bernauerstrasse close to where we were standing. In an odd way, I, someone who lives in the neighborhood, seemed to have had more in common with him, in that moment, than his wife, who knew nothing of the neighborhood. He told me about a check point near by which I had not realize had been a check point.

Heiner shared that his family had been one of the families which had been cut in half by the wall.  He explained that the open space today had once been aligned with the street to the intersection with buildings. It was at this intersection where a famous picture of a fully outfitted soldier jumped over a barbed wire barrier, his gun slung over his shoulder making his way to freedom had been snapped, which has become a symbol of the wall (see pictures bellow). Heiner spoke about how the street had first been divided with barbed wire before August 13, 1961 and how, at that time, people had to show papers to move back and forth over the border. After the  boarder was closed, the cement wall had been, in part, erected directly into the buildings.

As if transfixed in his mind’s eye, Heiner went back in time seeing and feeling how people had been weeping and wailing and how for a few weeks families would bring ladders to try to make contact with those on the other side. He added, however, that that had not lasted long. Very quickly, he said,  they adapted to the wall and to being cut off. He spoke of the randomness of the boarder control and how in order to visit family in the east, he had to apply for a visa and how even with a visa he would get stripped searched, gifts opened and sometimes confiscated for no reason. He shared how he would be prohibited from crossing at one check point only to be allowed through at another point. We both knew of places on Bernauerstrasse where people had dug tunnels for fleeing until someone betrayed them and those who were trying to escape were killed.

The Church of Reconciliation at Bernauerstrasse had been cut off from its congregation so much so that it was eventually torn down. After the wall fell, it was rebuilt as a chapel.  The walls of the chapel have been made out of the ashes of the original church compressed into material with wooden, open panels creating a facade around it. At noon daily, prayers are still offered up remembering those who lost their lives in search of freedom.

We were standing at the dead zone, where neither east or west existed. Heiner remarked how strange that was and how the street was full of emotions having experienced both great sorrow and  great joy.

Listening to his stories was deeply moving. To be standing next to a man who had lived the history of that street was more than amazing. Having met Heiner and Elke and the former East Berlin ladies made this experience one that will shine brightly in my memory for as long as I have one.

The former East Berlin ladies got into their car waiting for the crowds to disperse enabling them to drive off. Heiner, Elke and I walked together one block north on Brunnenstrasse while traffic began to unsnarl as streams of people, like rivers of water, were peaceably flowing in the streets in every direction all around us.

Then, just like that, we parted and in so doing the experience passed into history… 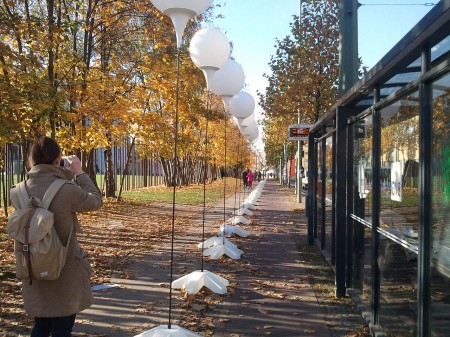 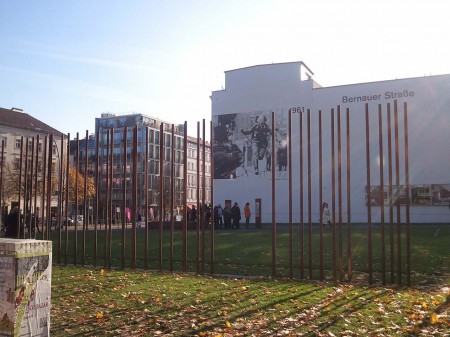 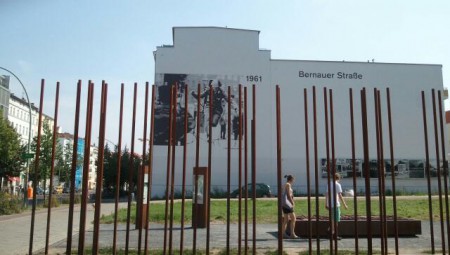 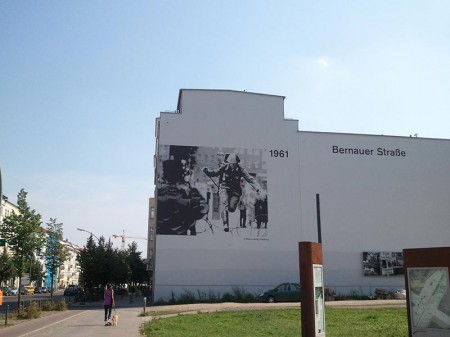 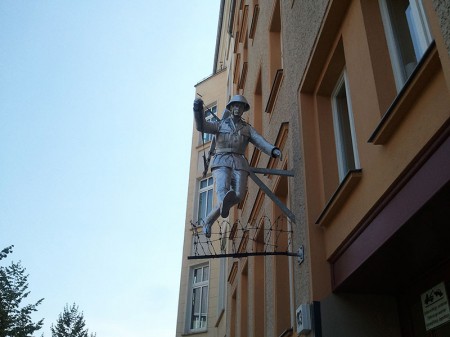 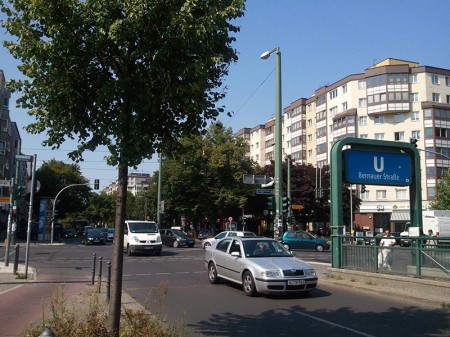